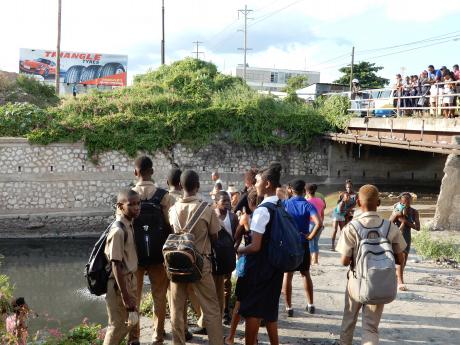 Onlookers view the body in the gully off Spanish Town Road.

His body was found on Monday in a gully on Spanish Town Road.
“We got a call about a motor vehicle accident. When we came on scene we found a body instead. We are still investigating," said assistant superintendent Noel Daley.
His body was discovered floating in the gully by a resident.
"Saturday night bout 9 o’clock a di last dem seh dem see him. Somebody else seh dem see him about 11 o’clock Saturday night; him fi come in and him don’t come in,” a relative told THE STAR.
A crowd had gathered to view the body, but his grandmother could not bring herself to look.
“Mi nuh know why dem kill Prince. Him nuh trouble nobody, a just wah likkle yute, him not even 18 yet. Dem just kill him fi nothing,” she said.
She said that he spent most of his time at home with her.
“Mi head a kill mi, mi have pressure and all dem ting deh; mi cya face it," she said.