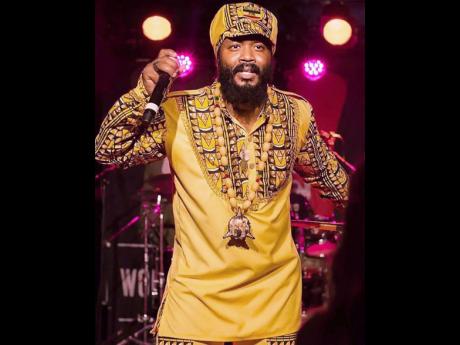 Reggae artiste Warrior King says the issues the world is facing today are all part of biblical prophecy that needs to be fulfilled.

In his latest track, Not Even the Dog, the singer talks about nothing being able to stop the wars, the crime and violence, and natural disasters as they are part of what must happen in the last days.

"All yuh see leaders a make dem laws and rules, nothing can stop the prophecies of the Most High. Everything weh yuh see a happen must happen. The wars and rumours of wars, a just the time, part of destiny, and none shall escape the judgement happening at this time," he said.

The singer told THE STAR that the track is timely, and he hopes it can open people's eyes to the higher power who ultimately controls the world's narrative.

"The whole concept and idea was given to me by Dalton Browne, who is also the producer. The inspiration is really the time and how things a go, and we believe that if people see that it is the Most High only who has power to change all that's happening, it can really make an impact," he said. "Everything weh a happen, a man make it happen; all the destruction, all the crime and thing. But a only one being can stop it."

A TRIBUTE TO WOMEN

Warrior King says he has not yet decided on an official release date for the song, but says it's already getting airplay.

"It just started playing last week and we're hoping when we officially release it, it will be really powerful. It has a rich sound and an even richer message," he said.

The song is part of his soon-to-be-released album, Woman's Workshop. The entertainer says the compilation will be a tribute to women across the globe.

"Women are special beings and mi just feel like a di time to recognise dem, because if yuh notice, the woman dem a step up and a take dem rightful place inna society. To be honest, my wife, who is also my manager, she played an integral role in this whole thing coming together for Warrior King, and so it's a dedication to her as well," he said.

"Me give thanks for her support and I don't know if apart from the Creator who gave me life, if I could do this without her. She keeps me level-headed, she keeps me focused, and she gives me guidance. Even though I'm the singer, it was a women who was the key person behind the project."