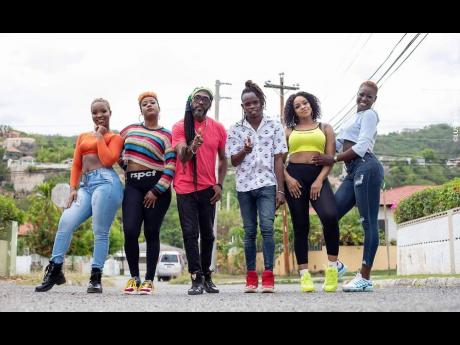 The team of dancers and choreographers in Dance Xpressionz, have been sharpening their acting skills, resulting in a new mini series dubbed, The Bartender.

Starring Stacy-Ann Facey as Goody, Kavaughn Scott as Dog Bed, Shanice Welsh as Five, Shenelle Rookwood as Browning, Shelly Callum as Bubbles and Mark Lyons as Shoppy, the mini series, which airs weekly on YouTube, has been creating a buzz.

The storyline focuses on Goody, whose life is turned upside down when she hires a young woman (Browning) to work in her bar. Browning then developes a liking for Goody's lover, Dog Bed.

Despite constant warning to steer clear of him, Browning is determined to wreak havoc on Goody's life.

As if being able to smell trouble from a mile away, Goody's two friends, Five and Bubbles, warn her to keep a close eye on Browning. Their efforts earn them a place on Browning's 'fix list' as she becomes determined to also root up their lives.

The series, now in its second season, has been growing in popularity, something the group never saw coming.

" The Bartender started out as us just doing some mini skits. It wasn't planned to be a series. We just wanted to do some random stuff to keep the people entertained. It was really the reception from the viewers, the fans, why we continued and ended up having a whole season," Facey said. They kept telling us they need the next part every time we put out a video and even though we never planned for that, we put some more stories together and ended up having 12 episodes. Now we're on to season two and it's going to be even bigger and better."

Orville Hall, co-conceptualiser and director for the series, told THE WEEKEND STAR that although he and his team had no elaborate plan for The Bartender in the beginning, the reception has caused them to dream big.

He says now they're looking at expanding to TV not just locally but internationally. "It would be a big deal if it is picked up and one that would help catapult us to a bigger international audience. We want to now be seen by a TV station or better yet, Netflix. We been through so much struggling trying to prove to people that we are a performing group and not just restricted to dance. We are a multi-talented group," he said. "Getting picked up by TV would also prove that there is substance coming out of Jamaica in terms of television series and a whole heap of creativity. What I love about The Bartender is that we shoot it in our community called Dancehall District and we involve everybody, every likkle shop bout the place and it highlights the communities and we want people outside of Jamaica to see that."