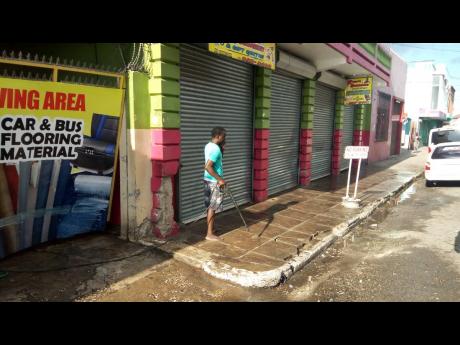 A man washes off the sidewalk where the Toyota Mark X collided with the wall of this business place.

The deceased has been identified as 27-year-old Jovian Peterkin of McCarty Street in Montego Bay.

Reports by the police are that about 3 a.m., Peterkin and five other persons were travelling down Barnett Street in a Toyota Mark X motor car.

On reaching the vicinity of the Salvation Army building, the driver lost control of the vehicle which crashed into the wall of the Ringo Harberdashery.

The impact of the crash sent the vehicle spinning across the roadway. It then crashed into a JPS utility pole.

Peterkin, who was travelling in the rear of the vehicle, was thrown from the car on to an iron post. He died on the spot.

The police and fire department were alerted, and upon arrival, the firemen assisted in removing victims from the mangled wreckage. They were admitted to hospital in serious condition.