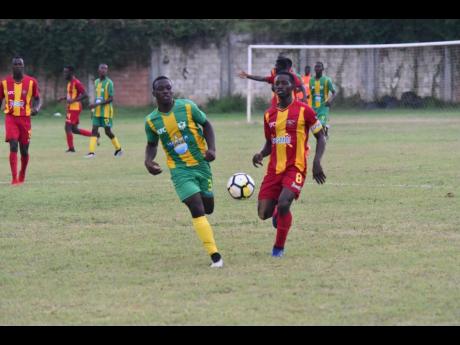 Still grieving the deaths of players who have worked in their programmes, Munro College and Cornwall College played out a 1-1 draw in the first leg of the second- round match in the ISSA/WATA daCosta Cup at the STETHS Sports Complex in Santa Cruz, yesterday.

Cornwall survived living dangerously throughout the first 45 minutes with Munro creating a number of chances and even hit the crossbar in the 37th. The St James-based team, however, took the lead on the stroke of half-time when young Kamali Powell snucked inside the far post to poke home a low cross.

The Malvern-based school was gifted the equaliser from a Tavoy Noicely own goal five minutes before the close of play, just seconds after Cornwall had a disallowed goal at the other end of the pitch.

Patrick 'Jackie' Walters, who is still saddened by Diego's passing, applauded his boys for the character his team displayed.

"We showed character and determination because Diego was a bright young man who showed a lot of promise so we played for him. I think it was a very competitive game, I have to commend the boys on the guts and determination they showed. We are looking forward to representing him with character as well on Saturday," Walters said.

Warren Barrett, assistant coach of Cornwall College, said despite mourning, they had to focus on the game at hand.

"It's always good to score on the road especially in this format where the away goal rule is in effect. Satisfying results despite the unfortunate own goal that we conceded late in the game. We are pretty confident we can come out on top on Saturday, at home. We just have to defend whole heartedly..." Barrett said.

"I don't think it had that much of an impact on the boys. What cushioned it is the fact that he graduated in 2015 so most of these players would not know him well. As Cornwallians, it had some impact but we had to switch our focus on today's game," he said.

"I have to extend condolences to his family and the entire Cornwall College paternity."